Monthly foreclosure stats through Sept: Filings down 29 percent in 2011 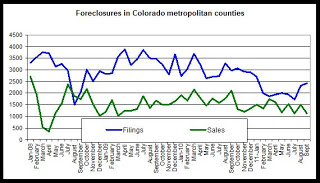 We recently released statewide foreclosure totals for Colorado during the third quarter. For those of you who follow the monthly stats, we've posted the monthly data through September 2011.

(The October data should be available next week.)

September 2011 foreclosure sales (completed foreclosures) were down compared to September 2010 with a decrease of 46.8 percent from 2,111 to1,124. The year-over-year drop in auction sales is the largest drop reported since January 2009.

In year-to-date comparisons, comparing the first nine months of 2010 with the same period this year, foreclosure filings were down 29.9 percent and sales at auction were down 22.2 percent.

See here for the full report.