Case-Shiller released its home price index for August yesterday. The home price index for the Denver area rose 0.4 percent from July to August, and fell 1.6 percent,year over year, from August 2010 to August 2011. Prices increased in August due to seasonal factors, although the overall index for the year remains below the index values seen during 2010. As can be seen in the first graph below, home prices are not likely to match even the levels seen at seasonal peaks during 2009 and 2010. 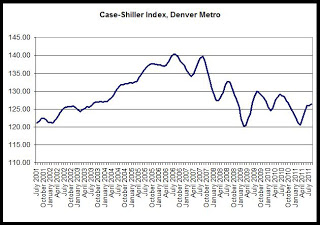 According to S&P's press release, there is also some good news:

“In the August data, the good news is continued improvement in the annual rates of change in home prices. In spring and summer’s seasonally strong period for housing demand, we cautioned that monthly increases in prices had to be paired with improvement in annual rates before anyone could declare that the market
might be stabilizing. With 16 of 20 cities and both Composites seeing their annual rates of change improve in August, we see a modest glimmer of hope with these data. As of August 2011, the crisis low for the 10- City Composite was back in April 2009; whereas it was a more recent March 2011 for the 20-City Composite. Both are about 3.9% above their relative lows.

In year-over-year comparisons for August, Minneapolis showed the largest drop, with a decline of 8.5 percent, while the index in Phoenix fell 7.7 percent. Year over year, home price indices fell in 18 of the 20 cities included in the study. Only Washington, DC and Detroit showed increases. 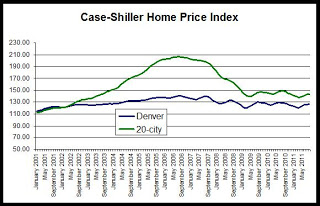 Nevertheless, the Denver index during August was at the lowest August value seen since 2003. 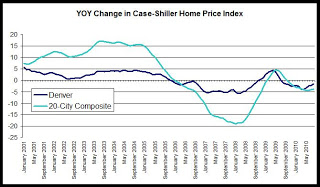 The last chart provides a closer look at year-over-year changes in the Denver index. Note the the change has been below zero since June 2010, and likely reflects the end of the homebuyer tax credit’s end which has led to a fall in demand and a decline in the home price index. The upward trend in the index in response to the tax credit is clear during late 2009 and early 2010. 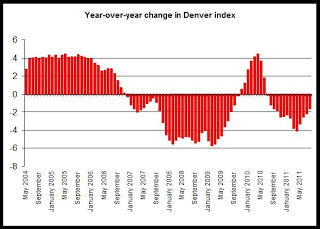 The chart shows that from July 2010 through August 2011, the home price index has been below the index for the same period a year earlier (July 2009 through January 2010). Given that 2009 was itself a weak year for home sales, this data does not suggest a speedy rebound for home prices.
Posted by Ryan McMaken at 8:18 AM