Industry employment trends in Colorado since 2007

New employment information for September will be available on Friday. Before those numbers, come out, however, we can take a quick look at employment trends in various industries. These numbers are based on employment totals through august 2011.

Employment growth by industry is important because it can give us some idea of whether or not job growth is occurring in traditionally high-wage industries or low-wage industries.

In the first graph, one of the first things we notice is that jobs in the construction industry are down considerable over both the last three years and the last five years. Over the past five years, construction jobs in Colorado have declined by almost 36 percent, and they've dropped by more than 15 percent over the past three years. This change reflects a drop of about 41,000 jobs since 2007. 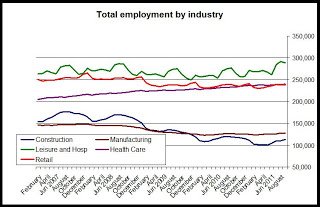 The second graph shows general trends in total employment in five industries since Janaury 2007. Construction and manufacturing are down while health care and leisure and hospitality are up. Retail trade has been largely flat. 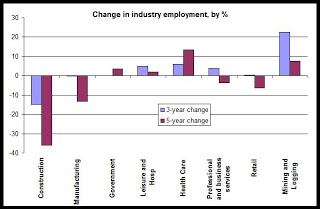 The fact that so much growth has occurred in leisure and hospitality suggests that there is a growing need for housing for workers who earn wages on the low end. Health care jobs, on the other hand tend to be more mixed, although this industry can also include a large number of low wage workers such as orderlies.

The loss of so many jobs in construction, which has traditionally been an industry that provides relatively high wages to workers with limited educational levels, will likely have an overall negative impact on aggregate wages.
Posted by Ryan McMaken at 9:10 AM