Colorado has now exceeded the personal income levels reached prior to the financial panic of 2008.

During the third quarter of 2010, the rocky Mountain Region and the US as a whole had exceed pre-recession levels while Colorado lagged.

Colorado still lags the US and region. As of the 4th quarter of 2010, The Rocky Mountain region is 1.1 percent above peak levels and the US is 2.0 percent above its own previous peak which occurred during the second quarter of 2008.

Over ten years from the 4th quarter of 2001 to the fourth quarter of 2010, US personal income iuncreased 42.8 percent, and in Colorado it increased 40.0 percent. In the Rocky Mountain region, the increase for the same period was 47.3 percent. 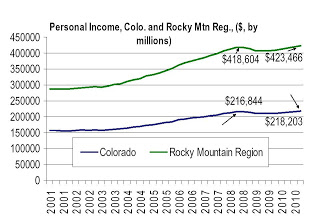 This is just one measure in which Colorado underperformed compared to the nation during the last decade. Overall job growth and income growth was also more sluggish in Colorado during this period as compared to many regions in the United States. The most recent report also shows Colorado in the lowest quintile of all states for personal income growth.

As has been noted by some regional economists, Colorado has recovered more slowly since the most recent recession than have other states in the Rocky Mountain region.

Overall, Colorado's real estate markets and labor markets have not suffered as much as many markets, but in a variety of ways, including personal income, Colorado is recovering more slowly than the nation. January 2011 employment data also showed Colorado's unemployment rate moving above the nationwide unemployment rate for the first time since the most recent recession began in late 2007.

Generally speaking, personal income has been flat in Colorado since 2008 reflecting a sluggish job market and wage growth. An increase of 0.6 percent over the previous peak, being an estimate, is effectively a sideways movement in income.