Earlier, we looked at statewide median home prices and existing home sales, as provided by the REALTORS' public data.

In both metro Denver and in the Colorado Springs area, the median home prices are more or less where they were in 2004.

I've placed the median home price curves above the year-over-year change curves to give a sense of how much prices have moved in recent months. In both cases, it looks like late 2009 and early 2010 saw some upward pressure in prices as a result of the homebuyer tax credits, but following the end of the credits, prices have flattened out and moved little.

Recent price increases appear to be more subdued in the Colorado Springs area: 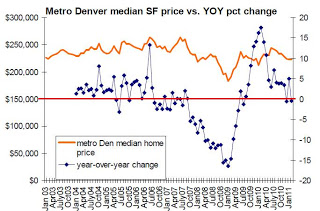 There are a few differences to note between the two regions:
1. Prices began to fall in the Colorado Springs area before the Denver metro area. This may possibly be due to a dearth in demand for purchase homes that grew in response to to the drop in the number of active military in the region following the beginning of the Iraq war in 2003.
2. The number of troops returning to the Colorado Springs region grew at the same time that the homebuyer tax credits were put in place. This may be the reason that there appears to be a more sustained period of year-over-year increases in home sales transactions/closings from mid-2009 to mid-2010.
3. In metro Denver, on the other hand, the period of positive year-over-year comparisons in home sales closings is not nearly as long.
4. However, the difference in home sales activity between the two regions has not produced significant growth in home prices in either either as shown by the two graphs above. Prices continue to be generally stable in both regions, with possible continued and very slow movement downward. 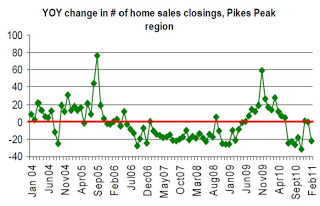 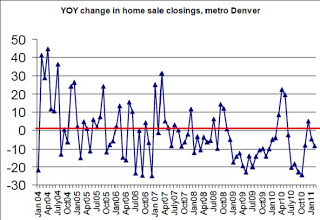