Behind the recent drop off in foreclosures in Colorado

The most recently released foreclosure data, available here, shows that Colorado experienced an unusually sharp decline in foreclosures during February.According to the press release:

New foreclosure filings dropped to a 30-month low in Colorado’s metropolitan counties during February. According to a report released today by the Colorado Division of Housing, foreclosure sales fell 26.4 percent from January to February as mortgage servicers continued to process foreclosures at an unusually slow pace in response to the “robo-signing” controversy that surfaced last fall.

As the first paragraph notes, the big driver behind this decline is the continued slow place in the processing of foreclosures put in place by the industry late last year. It appears that foreclosures have still not bounced back from this change in the process.

Colorado is not alone in feeling the effects of this change. In its March 10 release of foreclosure data, Realtytrac noted that national foreclosure numbers were at a 36-month low, which was similar to our own numbers showing a 30-month low. Realtytrac's press release contained the following:

“Foreclosure activity dropped to a 36-month low in February as allegations of improper foreclosure processing continued to dog the mortgage servicing industry and disrupt court dockets,” said James J. Saccacio, chief executive officer of RealtyTrac. “While a small part of February’s decrease can be attributed to it being a short month and bad weather, the bottom line is that the industry is in the midst of a major overhaul that has severely restricted its capacity to process foreclosures. We expect to see the numbers bounce back, but that will likely take several months.”

This is a good explanation of the recent drops in foreclosure numbers.

Here in Colorado, as the graph below shows, there was already an established trend downward in foreclosure filings, due to successes with housing counseling, and due to general stability in the real estate markets (which we've discussed here). 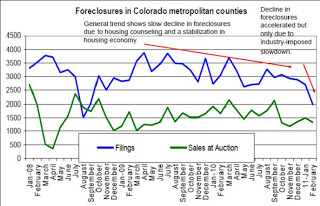 The ongoing slowdown in the processing of foreclosures by mortgage companies has caused the downward trend to accelerate, although this accelerated rate is not likely to be sustained.

One reason we suspect that foreclosure numbers will creep back up to follow the older trend line is the fact that during the fourth quarter of 2010, when the slowdown was first put in place, the foreclosure inventory actually increased following a period of decline in the inventory. This tells us that foreclosures are not actually going away at an accelerated pace, since the slowdown in processing has seemed to cause a backlog in the foreclosure inventory. The increase in inventory suggests that pending foreclosure are simply being evaluated longer, or put on hold, rather than being cured or withdrawn from the process. See below (Source: MBA Delinquency Survey): 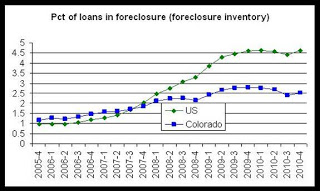 The more measured rate of decline in foreclosure totals, seen from late 2009 to late 2010 in the first graph above, is more likely to be representative of the overall housing economy trends in Colorado, and so an artificially steep drop should be viewed with some reservation.
Posted by Ryan McMaken at 2:36 PM