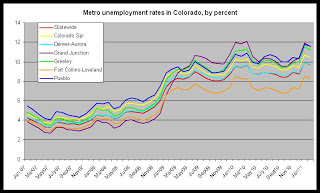 The following numbers reflect how far below the most recent peak are the February 2011 employment totals:

Pueblo has only fallen 6.1 percent from peak levels, although Pueblo already had a relatively weak job market during the peak period, which would explain why Pueblo continues to be among the areas with the highest unemployment rates. The Fort Collins Loveland area, on the other hand, is now only 7.8 percent below its peak, and is also the metro area with the lowest unemployment rate.

The Fort Collins-Loveland area had the lowest vacancy rate of any region during the fourth quarter of 2010, with a rate of 4.1 percent. The metro Denver area had the second-lowest vacancy rate of 5.5 percent. This coincides with the fact that the regional metro unemployment rates are lowest in the Fort Collins Loveland area and in the metro Denver area. Likewise, the areas with the highest unemployment rates, Pueblo and Grand Junction, have the highest metro-wide vacancy rates of 10.2 percent and 7.5 percent, respectively.

To explain this, some industry professionals have suggested that rental housing has benefited from the high demand in the Fort Collins-Loveland area. That is, as rents have increased in the Fort Collins-Loveland area, renters have looked to the Greeley area for more affordable rental housing. This may in turn be driving down vacancy rates in spite of a lack of job growth within the Greeley area itself.
Posted by Ryan McMaken at 1:34 PM