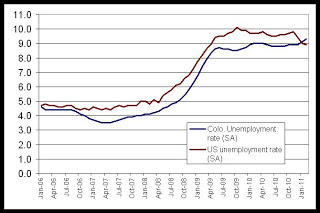 The second graph shows this relationship: 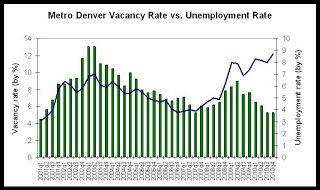 Over the past 18 months, though, the vacancy rate has fallen in spite of a heightened unemployment rate. This change was unexpected, although it could at least be partially explained by the lack of new development in rental housing, and by the decline in the attractiveness of for-sale housing.

Another large factor has been the fact that household formation has continued at a strong pace in spite of stagnant economic and job growth in the area. This was no doubt helped along by the fact that Colorado was experiencing a lower unemployment rate than the nation in general. This encouraged workers to relocate to Colorado, and made Colorado a relatively attractive place for entry-level workers who, in many cases, are rental housing's target market.

With the reversal of this trend, the demand for rental housing may be impacted if it leads to a significant number of workers and households seeking employment outside the state. Vacancy data from the first and second quarters of this year will be helpful in determining if this change in unemployment rates will have much of an effect on the multifamily industry.