From an owner/landlord perspective, the metro Denver area is one of the strongest markets in Colorado for multifamily rentals. As we noted in the press release for metro Denver vacancies on January 26:

Vacancy rates in the metro Denver are generally now at 10-year lows as the market has tightened in spite of a lack of job growth.

The first graph shows where the Denver area stands in relation to other metro areas in Colorado. Although Greeley's vacancy rate recently fell below metro Denver's rate, over the past several quarters, only the Fort Collins-Loveland area has consistently reported a lower vacancy rate than metro Denver: 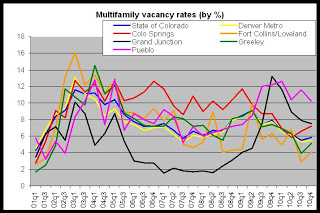 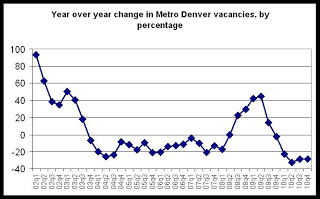 In the third graph, we see that year-over-year changes in average rent in the Denver metro area have been trending upward. The last three quarters have all shown positive changes of more than three percent each quarter. Again, there isn't anything terribly unique about three quarters in a row of year-over-year increases in average rents, but what is unusual here is the extent to which rents have increased when compared to the previous year. With a change upward of more than three percent each quarter, three quarters in a row, changes in average rents are now beginning to resemble trends not experienced in Colorado since 2001, which in Colorado, was before the 2002 tech bust that followed the 2001 national recession. 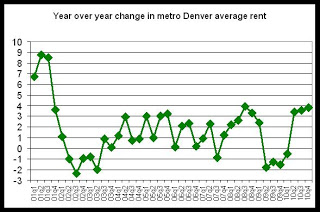 Conclusions: Trends in vacancies and in average rents in metro Denver indicate a high demand for multifamily rental housing that has not been seen since prior to the 2002 Colorado recession. If trends continue, especially given the absence of new construction, the metro Denver area will experience additional increases in rent levels as vacancy rates tighten further.