New single-family home sales fell again in the US, and in the West region, which includes Colorado, new home sales fell to the lowest February total recorded in at least ten years.

The report, which monitors sales activity for newly constructed houses, reported that in the West, new home sales were down, year over year, falling to 5,000 in February 2011 from 7,000 new homes sold in February 2010. Nationwide, sales dropped off 219.6 percent, falling from 27,000 to 19,000 during the same period.

In February, new home sales were at the lowest point for the lowest volume in at least a decade. The first chart shows monthly new home sales totals for each month since 2003. February’s total of 5,000 new homes sold is below totals for both February 2010 and February 2009, and is near 4,000, the lowest monthly total recorded in any month during the last decade. 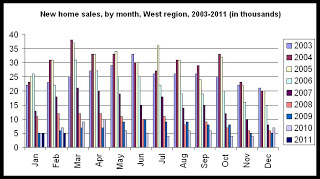 The drop off in home sales is likely tied to the end of the new home buyer tax credit which expired in April. The second chart shows that in both the West and in the US, new home sales were pushed up by the tax credit, and then fell quickly after April 2010. Note, however, that sales totals are largely flat in the West region while nationally, they continue to decline. 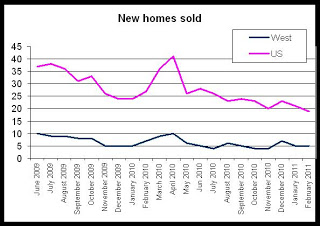 New home sales and new home inventory continue to fall and have generally followed a downward trend since the middle of the decade.

The third chart shows the declines in both US and regional new home sales. 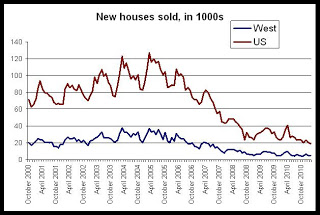 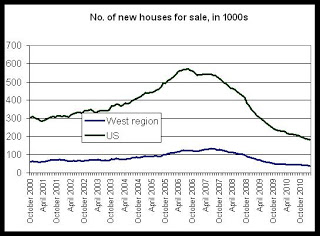 The fifth chart shows the difference between the number of homes in the West region for sale at the beginning of a month vs. the number of homes sold during that month. Interestingly, the build up in inventory can be seen as it grows from 2004 to 2007. Historically, it appears that the a “normal” difference between new homes for sale and new homes sold is somewhere between 40,000 and 50,000 homes in the region. This total reaches almost 120,000 homes during the peak months, and has now fallen to below 40,000 homes, where the total has remained for the past several months. The build-up in inventory clearly shows a situation in which the construction of new homes was exceeding the purchase of new homes. The difference between new homes for sale and new homes sold has declined considerably in recent year, although this is due primarily to a large decline in new construction, and not to significant increases in demand for new homes. 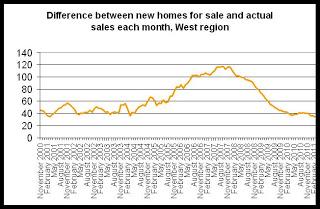 Summary: Nationally, new home sales and new home construction are very weak, and continue to move downward. In the West region, the trend in new home sales appears to have stabilized in recent months, with new sales totals consistently coming in between 4,000 and 7,000 sales since May 2010. However, the number of houses for sale did reach a new low in February with only 39,000 new houses available for sale.

Note: The Census Bureau only provides new home data at a regional level. Extrapolating to the Colorado is problematic with this data since the West region includes California, Arizona and Nevada, all of which experienced large housing bubbles. Nevertheless, regional banks, builders and housing providers will gain insights into how Colorado fits into the larger Western region.
Posted by Ryan McMaken at 11:16 AM