House prices in January in the Mountain region, which includes Colorado, fell 8.6 percent, year-over-year. Nationally, the house price index fell 3.8 percent. The new house price index numbers, released today by the Federal Housing and Finance Agency, also showed that the national index is down 18.3 percent from the peak level reached in June 2007, while the Mountain region's index is down 28.6 percent over the same period.

The FHFA monthly index is calculated using purchase prices of houses backing mortgages that have been sold to or guaranteed by Fannie Mae or Freddie Mac.

The decline in house prices, both regionally and nationally, continues the trend that began in mid-2007 as prices as fallen almost constantly since the peak. 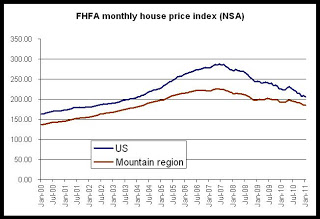 Notably, the FHFA index dows not show a "double dip" as can be seen in the Case-shiller data (discussed here) in which prices begin to recover in 2009, but then fall again after mid-2010. The FHFA monthly data shows nothing but losses following mid-2007. The second chart shows each month's house price index compared to the same month a year earlier: 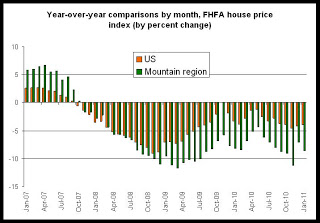 In the second chart, we can also note that the Mountain region has performed more poorly (from a seller's perspective) than the national index. This runs contrary to some local experience and some statistics. The Case-Shiller data for the Denver metro area, for example shows that local prices did not decline as much as the national composite index following the financial panic in 2008.

Data specific to Colorado and its metro areas can be found in the FHFA quarterly data, which we discussed here.
Posted by Ryan McMaken at 12:05 PM