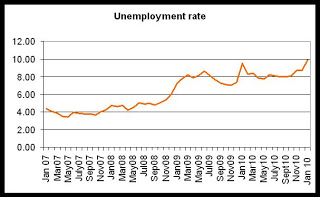 In the second chart, we see total employment plotted with the total labor force for each month since 2007. 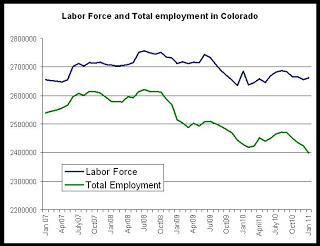 In the third graph, I've shown the year-over-year percentage change in total employment. In every month since September 2008, the change has been negative, meaning that for the last 27 months, each month's employment total has been lower than the same month one year earlier. In January 2011, total employment was 1.2 percent lower than during January 2010. 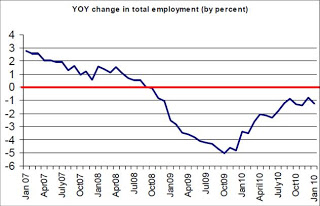 [All these graphs are for Colorado statewide.]

Clearly, this will have an impact on affordability of rental units as incomes continue to be squeezed by a lack of demand in the labor markets. This will put downward pressure on rents, although it may not be enough to keep rents down given the declines in rental vacancies in recent quarters. See here for more.

This will also continue to impact the demand for purchase housing as household incomes are squeezed and as many potential home buyers continue to worry about job security, thereby causing some buyers to put off buying a home.

Check back with this site for additional regional analyses for: Northern Colorado, Colorado Springs and other regions.
Posted by Division of Housing at 8:42 AM