Colorado lost 20,500 jobs in February, compared to February of last year, and the non-seasonally-adjusted unemployment rate rose slightly to 9.7 from February 2010's rate of 9.4 percent. According to the most recent employment data released by the Colorado Department of Labor and Employment, total employment in February, not seasonally adjusted, fell to 2.41 million jobs. There were 14,500 fewer people in the work force during February, compared to February 2010, which mitigated the rise in the unemployment rate. 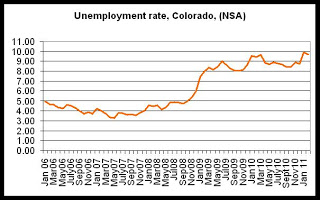 As can be seen in the second graph, both total employment and total workforce size have fallen off in recent months, and both remain well below the July 2008 peak. 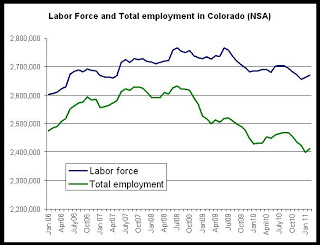 Employment totals are still more than 221,000 jobs below the peak levels experienced during July 2008 when there were 2.63 million employed workers. Since the labor force peaked in July 2008, it has fallen by more than 96,000 workers. 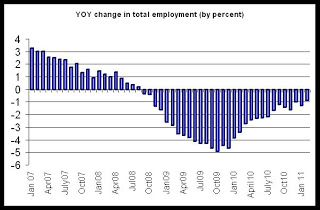 This is the second month in a row in which Colorado's unemployment rate has exceeded the national rate (discussed here.) Recent personal income data (discussed here) from the BLS also showed Colorado lagging the nation and the region, with Colorado placing in the bottom quintile for all states for personal income during the fourth quarter of 2010.