Foreclosure activity in Colorado drops to five-year low during January 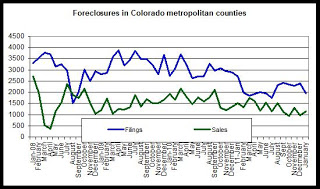 Both foreclosure filings and sales at auction in Colorado’s metro counties were down during January this year when compared to the same month last year. According to a report released Thursday by the Colorado Division of Housing, foreclosure auction sales in Colorado’s metropolitan counties were down 23.3 percent in January compared to January of last year, dropping from 1,499 to 1,150. January 2012’s sales total was the lowest January total reported in five years.

New foreclosure filings fell year over year during January with total filings dropping 28.2 percent from 2,699 filings in January 2011 to 1,939 filings during January of this year. January 2012’s filings total was the lowest January total reported in five years.

“Foreclosure filings during January fell to levels well below any other January since 2008, and this continues a trend of diminished foreclosure filings activity that we’ve been seeing since the fall of 2010,” said Ryan McMaken, a spokesman with the Colorado Division of Housing. “In year-over-year comparisons, foreclosure filings have now fallen for fourteen months in a row, which suggests a well-established trend at this point.”

During January, the counties with the largest decreases in foreclosure filings, year over year, were Douglas County and Broomfield County, where filings decreased by 44.5 percent and 40 percent, respectively. Larimer County reported the smallest decline in filings with a decrease of 16.7 percent from January 2011 to January 2012. All counties surveyed reported year-over-year decreases in foreclosure filings.

It is still unclear as to how the recent legal settlement between federal officials, state attorneys general, and mortgage servicers will affect foreclosure trends.

“There have been some indications that some servicers have been holding back on foreclosure processing until the deal was final,” McMaken said. “But it’s hard to predict how that would pan out here in Colorado and whether that would be enough to reverse the present downward trend.”