According to the December Home Price Index (HPI), released on February 2 by CoreLogic, the year-over-year decline for Colorado during December was the eighteenth decline in a row since July 2010.

Nationally, the index fell 4.69 percent, and it rose 0.19 percent in the Denver-Aurora-Broomfield metro area during the same period.

The first graph shows the year-over-year changes in attached and detached single-family homes for the past 33 months in the US, Colorado and the Denver metro area. Over the past two years, the general trend in all three areas has been shaped by the home buyer tax credit, which was introduced in 2008 and expired in April 2010. Clearly, home prices climbed throughout the duration of the tax credit period, but declined after the credit's expiration. 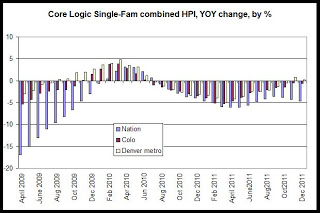 This data for December suggests that, although the year-over-year declines have lessened in magnitude, home prices have not yet turned around in Colorado as of December 2011. Metro Denver, on the other hand, has now shown a year-over-year increase for two months in a row. In other indices, home price growth has been either flat or slightly negative in recent months. The Case-Shiller report for November 2011, for example, has shown 14 straight months of year-over-year declines in home prices for the metro Denver area.

If detached single-family residences are separated out, we find that home prices are slightly stronger. 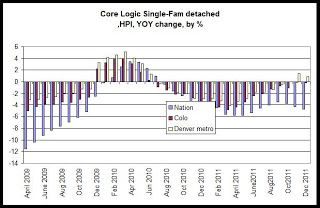 In detached homes only, the Corelogic home price index in December fell 0.18 percent year over year in Colorado while the index rose 0.89 percent in the Denver area. Nationally, the index fell 4.78 percent during the same period. With an increase of nearly 1 percent, detached single family, as expected, shows the strongest growth in the Denver area, and growth is significantly stronger than in the nation overall. However, December's year-over-year growth in Denver and Colorado was weaker than was the case during November. 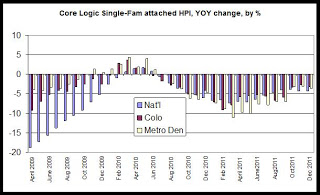 The CoreLogic HPI is a three-month weighted average of October, November and December (with December weighted the most) and is not seasonally adjusted.
Posted by Ryan McMaken at 4:38 PM