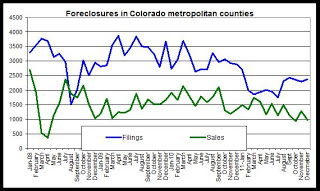 We recently released statewide foreclosure totals for Colorado during the fourth quarter. For those of you who follow the monthly stats, we've posted the monthly data through December 2011.

Filings rose 3.7 percent from November to December 2011, and auction sales were down 25 percent over the same period. December’s filings were at the second-highest level reported since January 2011.


See here for the full report.