During the fourth quarter of 2011, only six states reported lower percentages of mortgage loans that were were either in foreclosure or were 90 days delinquent. According to the fourth quarter's national delinquency survey, released today by the Mortgage Bankers Association, the percentage of mortgage loans in Colorado that are either in foreclosure or are either 90-days delinquent, was 4.11 percent. Nationally, the rate was 7.73 percent. Only Nebraska, Alaska, Montana, Wyoming and the Dakotas reported delinquency/foreclosure rates that were lower than Colorado's.

The graph shows the the percentage of loans that are either in foreclosure or 90+ days delinquent in both the US and in Colorado over the past six years. The foreclosure/90-day delinquency measure has decreased in in Colorado for every quarter since the fourth quarter of 2009. 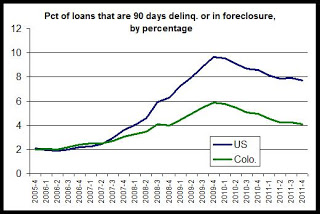 See here for more form the 4th quarter report.
Posted by Ryan McMaken at 10:07 AM