Colorado 15th for per capita income during 2011

Colorado's growth rate places it in the top quintile for personal income growth as measured by the BLS.

The first map shows historical per capita income rates for Colorado, not adjusted for inflation. Per capita personal income in Colorado during 2011 was still 0.2 percent below the 2008 peak of $44,180. Per capital personal income fell considerably from 2008 to 2009 in response to the 2008-2009 recession. 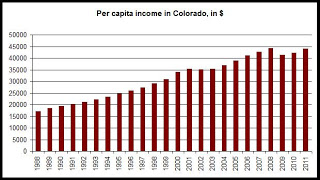 The second graph shows the growth rate in total personal income in Colorado. Personal income growth over the past decade has never matched the consistent growth that occurred during the 1990s before the dot-com bust. Personal income declined from 2008 to 2009. 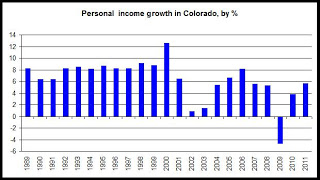 This report reinforces the view that Colorado is performing better than many states in a variety of economic indicators. Recent data shows that home prices have stabilized while foreclosure rates and delinquency rates continue to be far lower in Colorado than in the majority of other states. Colorado's relatively high placement for per capita income would help to explain some of this.
Posted by Ryan McMaken at 9:17 AM