Philly Fed: Coincident index for Colorado up more than most states

The Coincident Index for Colorado rose 0.5 percent from December 2011 to January 2012, which was a larger growth rate than most states. January's index, which was released yesterday by the Philadelphia Federal Reserve Bank, is an index calculated from nonfarm payroll employment, average hours worked in manufacturing, the unemployment rate, and wage and salary disbursements deflated by the consumer price index (U.S. city average).

According to the January 2012 report:

January's month-over-month increase was the 16th increase in a row for Colorado, and was the longest stretch of monthly increases reported since 2007.

The graph below compares the month-to-month change in both the Colorado Index and the US index. In recent months, the growth rate in Colorado has begun to outpace that of the nation. 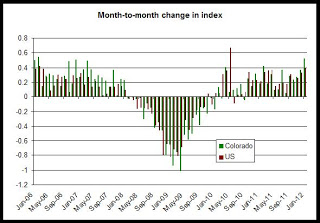 The second graph shows year-over-year changes in the index, and an upward trend is evident here as well: 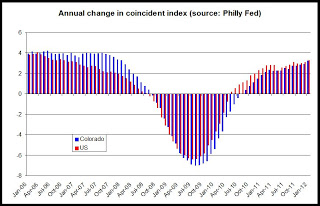 The coincident indexes combine four state-level indicators to summarize current economic conditions in a single statistic. The four state-level variables in each coincident index are nonfarm payroll employment, average hours worked in manufacturing, the unemployment rate, and wage and salary disbursements deflated by the consumer price index (U.S. city average). The trend for each state’s index is set to the trend of its gross domestic product (GDP), so long-term growth in the state’s index matches long-term growth in its GDP.
Posted by Ryan McMaken at 9:01 AM