Condo prices in January down again in metro Denver, statewide 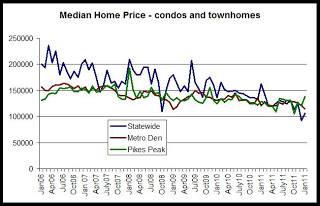 The second graph shows year over year changes in median home prices for condos and townhomes. October and November 2011 showed some small increases in all three areas, although all three areas declined again during December, and only the Pikes Peak area showed an increase in January 2012. Until October 2011, all three areas had reported declines in the median home price every month since February 2011. The overall trend in home prices among condos and townhomes over the past year has been down, although the January year over year increase was the largest seen in the region since 2008. The small sample size for Colorado Springs condo sales, however, which ranges from 70 to 100 sales in recent years, adds volatility to the numbers. 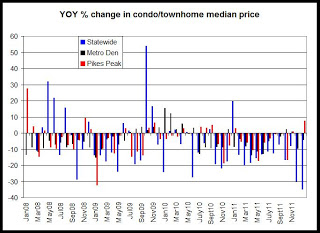