According to new housing construction and housing starts data released last week by the US Census Bureau, there were approximately 10,800 housing units started in the West during October 2011. Of the new units started, 6,000 were single-family structures and 4,800 were structures containing more than one housing unit. 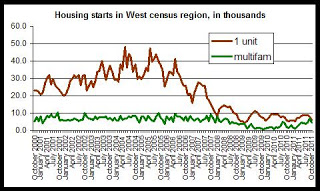 The West census region includes California, so given the size of the West census region, the fact that total housing starts are at 10,800 indicates that new home construction continues to be very light throughout the region. Housing starts totals ranging from 35,000 to 45,000 were common from 2004 to 2006. However, most of this decline was driven by drops in single-family activity, and not by large drops in multifamily activity.

The second graph shows month-by-month comparisons in housing starts for each year in the West. October's housing-starts total decreased from September to October, reflecting a trend found since 2008. Prior to 2008, starts tended to increase from September to October. However, October 2011's total is now at a three-year high for October, but remains well below totals reported from 2003 to 2007. 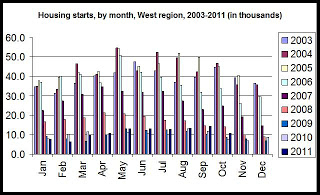 More sustained growth was visible in starts for structures with more than one housing unit. As can be seen in the third graph, October's total was significantly higher than October 2010, and is at a four-year high. 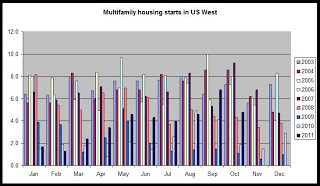 Starts for buildings with more than one unit were relatively numerous in October, showing a continued trend of growing activity in multifamily construction. Single-family starts showed signs of life as well, but were far more restrained than was the case in multifamily starts.

We can also note that the surge in multifamily starts is reinforced by recent increases in new multifamily permit data as well.
Posted by Ryan McMaken at 10:16 AM