Case-Shiller released its home price index for September today. The home price index for the Denver area fell 0.8 percent from August to September, and fell 1.5 percent,year over year, from September 2010 to September 2011. Prices fell in September due at least partially to seasonal factors, although the overall index for the year remains below the index values seen during 2010. As can be seen in the first graph below, home prices are not likely to match even the levels seen at seasonal peaks during 2009 and 2010. 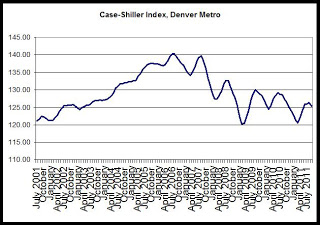 “Home prices drifted lower in September and the third quarter,” says David M. Blitzer, Chairman of the Index Committee at S&P Indices. “The National Index was down 3.9% versus the third quarter of 2010 and up only 0.1% from the previous quarter. Three cities posted new index lows in September 2011 - Atlanta, Las Vegas and Phoenix. Seventeen of the 20 cities and both Composites were down for the month. Over the last year home prices in most cities drifted lower. The plunging collapse of prices seen in 2007-2009 seems to be behind us. Any chance for a sustained recovery will probably need a stronger economy."

In year-over-year comparisons for September, Minneapolis again showed the largest drop, with a decline of 7.4 percent, while the index in Las Vegas fell 7.3 percent. Year over year, home price indices fell in 18 of the 20 cities included in the study. Only Washington, DC and Detroit showed increases. 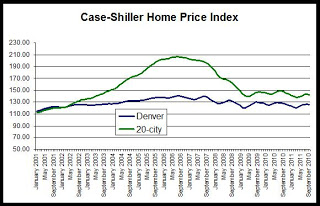 Nevertheless, the Denver index during August was at the lowest September value seen since 2003. 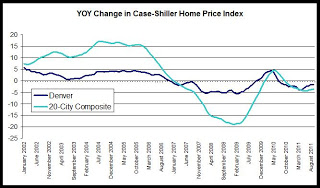 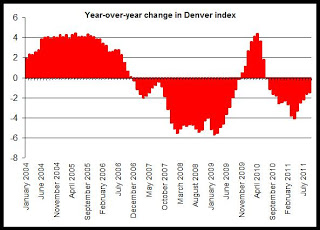