The Bureau of Labor Statistics released quarterly data on extended mass layoffs and initial unemployment claims for the third quarter of 2011. 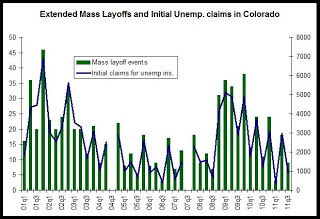 Employers in the private nonfarm sector initiated 1,226 mass layoff events in the third quarter of 2011 that resulted in the separation of 184,493 workers from their jobs for at least 31 days, the U.S. Bureau of Labor Statistics reported today. Total extended mass layoff events decreased over the year from 1,370 to 1,226, and associated worker separations fell from 222,357 to 184,493. Events and separations reached their lowest third quarter levels since 2007. Both events and separations have decreased over the year for eight consecutive quarters. Third quarter 2011 layoff data are preliminary and are subject to revision.

Both events and separations in the manufacturing sector declined to series’ lows during the third quarter of 2011. Fifty percent of private nonfarm employers indicated they anticipated some type of recall, up from 45 percent a year earlier. 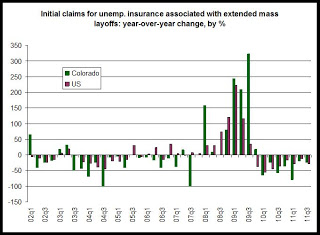 The ongoing declines in mass layoff events and claims suggest a slow and ongoing recovery in the job markets, although the volume in job creation has yet to prove sufficient to absorb new additions to the labor force.
Posted by Ryan McMaken at 4:32 PM